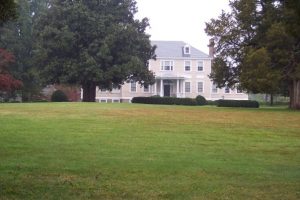 Haw Branch Plantation is located in Amelia County, about 35 miles south of Richmond, Virginia near the Amelia Courthouse. It’s a time capsule of a Georgian-style plantation from 1745, although the interior carries the signature Federal-style from 1815. The plantation was named for the hawthorn trees that lined the banks of a small stream on the land.

It was built on a parcel of 15,000 acres by Colonial Thomas Tabb and his wife Rebecca. In the Revolutionary War, it was expanded to help house soldiers. The property also had a smokehouse, a schoolhouse, a weaving room, and a kitchen. The property also comes with ghosts and a supernatural portrait that changes color.

After passing through families from both the Tabbs and Masons all the way until 1872. The owners of the plantation had the lead roof removed and melted down to cast bullets for the Confederate soldiers in the Civil War. Afterward during Reconstruction, the house was sold to owners who bred jumping horses.

The really fascinating history, however,  started in 1965. William Cary McConnaughey and his wife Gibson bought the abandoned and dilapidated house for restoration. Gibson could trace her family history back to Colonial Tabb, which was why she purchased the property.

The place was in awful shape: the outside hadn’t been painted since at least 1929 and there was a cow wandering around in the English basement!

While Gibson admitted she had heard of some ghost stories about the place, it seemed the activity heightened when her family moved in. Spirits sometimes get stirred up when things change. Renovations seem to increase activity, which appeared to be the case at Haw Branch.

The first sign of possible paranormal happenings in the home began on November 23, 1965. Well, not a sign, but an impossibly-loud, blood-curdling scream that ripped through the house in the early morning hours from the attic. Cary and Gibson went to check but could find nothing to explain the noise and their two dogs just shook at the bottom of the steps. Every 6 months, in May and November, the woman’s scream would rattle the house. They were never able to determine where it came from.

The repeating timetable suggests the screams were a residual haunting. These are hauntings that act more like a recording than a spirit with intelligence. Sometimes it’s believed strong emotions can imprint themselves on a place and echo throughout history. Perhaps the scream is one of these echoes, which then makes you wonder what could have happened to cause it originally.

However, on May 23, 1968, instead of the scream, a screech was heard outside along with heavy footprints. The family’s two kids claimed they saw a bird-like creature in the yard, at least 6 feet wingspan. The creature disappeared with no evidence of its presence.

Gibson stayed up late one night trying to record the strange sound, but the noise didn’t happen. When she gave up and turned the recorder off, a scream happened.

The Lady in White

In the summer of 1967, Gibson had an encounter with a proper apparition. While getting a glass of milk in the middle of the night, she saw something in the hall. A luminous slim figure of a woman in a white dress was floating there. She disappeared a few seconds later. Gibson was told that her great-great-grandmother had seen such a spirit as well, and it had even touched her.

When Gibson saw the Lady in the library, the spirit left a burst of orange blossom scent behind. The animals know her too, for their dog will randomly roll over and wag his tail to empty places.

Footsteps are common throughout the home. It’s almost normal to hear footsteps going up and down the stairs or pacing around the attic.

Noises from the attic are also commonplace. The family has heard loud thuds and the unmistakable sound of furniture being rearranged. When they go to check, however, the dusty furniture is still in its place and nothing has moved. There’s a broken rocking chair in the attic that will rock with no one sitting in it.

The basement has its secrets too. A song quietly hummed can be heard down there. There is also a secret room in the cellar, bricked off with no access inside that the cats intensely watch.

The most fascinating tale of all, however, is the story of the color-changing portrait.

A cousin to the McConnaughey’s claimed to have a pastel portrait of a young woman who was a distant relation. She explained that the girl had lived in Massachusetts and her name was Florence Wright. She had passed away before her portrait was finished, still in her twenties. The cousin had been holding onto the portrait for over two decades.

When they finally uncrated the portrait in its gilded frame, they were confused to find a charcoal portrait instead of a pastel piece. It was unsigned and tightly sealed in the back of the frame. Still, she was family, so they hung it up above the library fireplace.

Here’s where things get interesting. A few months later Cary was in the library when he noticed the portrait looks different. In fact, there was a red blush on Florence’s face! Her hair was getting lighter and her skin was changing color to a soft peach. Her eyes would also follow people around the library.

They had multiple people from neighboring Virginia colleges to see what the paints might have contained to change color. They couldn’t find anything other than normal paint. After over a year, the painting was in full pastel color!

A psychic came to investigate the painting. He thought that Florence’s spirit was attached to the painting because she died during its creation. He explained that she could change the colors whenever she wanted to but had taken on the charcoal look because she was unhappy in storage for so long. She apparently liked Haw Branch and so her color returned.

There were still some questions about the portrait, and in 1972 Gibson got some answers. One night in the library one of her daughters and a friend were playing around when they changed seats. A few moments later, the huge portrait crashed to the floor exactly where they had been playing. The fall caused the wooden frame to break, unsealing the back of the frame completely. There was a plague with Florence’s name and an explanation that she had died at the age of 24 of a stroke while playing the piano.

When the frame was fixed and they were maneuvering the portrait back over the fireplace, the light from the afternoon sun glanced off the portrait and the final mystery was solved. The artist had signed his name in pencil, and only a specific angle would allow it to be seen. His name was J. Wells Champney, and he had died after finishing the painting by falling down an elevator shaft in New York.

Over the years, the Plantation has seen its fair share of authors, paranormal investigators, reporters, and others. The McConnaughey’s have given tours of their home and even written books on the history of their home and the surrounding area.

If you feel you’re brave enough, see if they’ll let you into their gorgeous home. Just make sure to be polite to all the residents, even the ones you can’t see.