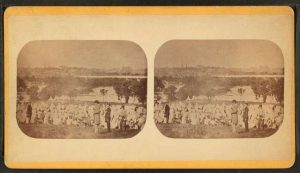 The Ghosts of Belle Isle

Belle Isle is a picturesque park and the largest island in the middle of the James River. It’s only accessible by a suspension bridge underneath the highway that leads into Richmond. People walk and bike across the bridge to get to the island to explore the old ruins of previous generations. It’s also home to the remains of one of the worst POW camps from the Civil War. It would make sense that, as in all other places touched by the Civil War, there are supposed ghosts that haunt the island.

At 54- acres, Belle Isle is a large island in the middle of the James River and is just outside of Richmond’s downtown area. There are two paths across the water to get to the island; the first is a pedestrian bridge suspended underneath the Robert E. Lee bridge or crossing the park bridge under 22nd street.

A gorgeous island park, Belle Isle has trails for hiking and biking, and there are beautiful views of the Richmond skyline. There are rock-climbing hooks drilled into old brick walls of abandoned buildings. The waters around the island offer peaceful swimming holes and rapids that are perfect for rafting and kayaking in the warmer months.  Belle Isle offers a quiet reprieve from the hustle and bustle of Richmond’s downtown area just a few minutes away.

The History of the Island before the Civil War

The local Native American tribes initially knew the island in the area to be a good fishing spot. Captain John Smith explored the island back in 1607 while exploring the James River. Known as Broad Rock Island, the Captain bought the island from Chief Powhatan in 1608, and the settlers began a fishery there.

In 1815, a wooden dam was built on the southern side of the island to help with the powering of a nail company. The Old Dominion Iron and Nail Company opened in 1832 and created everything from nails to horseshoes, bars, spikes. They even made the plates used in the Civil War on the C.S.S. Virginia, the first steam-powered ironside ship. The ship was bullet-proof to all contemporary firepower and was a steam-powered battering ram that would cut through Union ships effortlessly.

Since the factory employed so many Richmonders, a village grew up on the island to house the workers and their families. A school, church, and general store were all built to accommodate the growing population. A quarry and a mill were also opened on the island in the years before the Civil War. Belle Isle was a prosperous little town away from the growing Richmond Capitol.

They lived in relative peace until 1861 when Virginia seceded from the Union during the Civil War. The island inhabitants were forced to move, and The Confederate Army changed the place into a prisoner-of-war camp for captured Union soldiers.

After the war, in the twentieth century, the Virginia Electric Power Company was a hydroelectric power plant built on the island. The plant was eventually abandoned, and both it and the ruins of the nail factory can be found overgrown and crumbling.

The Prisoner Camp on Belle Isle

There was an infamously notorious prisoner-of-war (POW) camp on Belle Isle during the Civil War, from 1862-1865. The Bell Isle compound was compared to Georgia’s notorious Andersonville POW camp as the most heinous of all the Confederate prison camps in terms of conditions and brutality.

Throughout the prison’s opening, over 30,000 Union soldiers were processed on Belle Isle. At its peak, the population was around 10,000 soldiers trying to sleep in only 3,000 cheap fabric tents. The elements killed many of the soldiers, as well as starvation and disease. Many tried to flee the island to either be killed by Confederate gunfire or drowned in the rough white water currents around the island in the James River.

At least 1,000 Union soldiers died due to exposure to the elements, disease, lack of food, and from artillery fire (fired upon anyone attempting to escape).

It was said to be one of the most ruthless Confederate POW camps during the Civil War with just how little treatment was given to the POWs. The South barely had the supplies to feed and clothe their soldiers, never mind care for the enemies. They couldn’t (or perhaps didn’t care to) protect the Union forces from Mother Nature.

The actual death toll amounts are unknown. Most of the bodies of the dead soldiers were eventually exhumed and appropriately buried in a national cemetery. However, reports in Northern newspapers claimed the burial grounds on the island were too close to the water. Bodies were swept into the current of the James River, never seen again.

A Dr. De Witt C. Peters examined 250 paroled Union soldiers from the camp in 1864. He noted that the men were essentially living skeletons, partially nude from exposure to the elements, and had a host of illnesses like scurvy, diarrhea, and frostbite. Most of the men were driven insane by the harsh realities on Belle Isle, and many couldn’t remember anything of their past other than the island.

After experiencing pain and torment, it is no wonder that people believe there are ghosts trapped on Belle Isle?

Most of the ghosts seen amidst the walking trails and overgrown structures on Belle Isle appear to be those wearing blue Union uniforms.

In her book “Haunted Battlefields: Virginia’s Civil War Ghosts,” a local author named Beth Brown wrote that she captured an electronic voice phenomenon (EVP) on the island. An EVP is when a voice can be heard on recording equipment that the people in the area did not hear at the moment. Asking a question while recording, and getting an answer when the recording is played back, is a typical example of an EVP.

Brown found that she got a recording of a male voice asking, “Where are we?”

When she asked to whom she was speaking, a voice said “Victor.”

A hiker once heard disembodied footsteps following them around the trails, only to see no one behind them. Shadow figures, strange orbs of lights have also been seen around the island and even at the hydroelectric plant. Some people have reported small pebbles being thrown at them though there was no one around to do it!

Another group of hikers claimed to hear a horse’s hooves galloping up to and past them, as well as the sound of something being dragged behind said horse. Did they hear the dying moments of a prisoner dragged to his death?

It’s common to believe that tragedy traps human spirits, and suffering at the hands of the Confederates during the Civil War was undoubtedly a tragedy. Nobody should suffer harsh winters on an island in the middle of a freezing river. There were no tents, and those that could get on had to pile in for what little warmth they could offer through their body heat. They had to suffer through the intense Virginia summers and storms with no cover and no protection. Mosquitos attacked in swarms, and diseases ran rampant.

Was it any wonder men lost their minds there?

Learning from the Past

As you hike around the trails of Belle Isle, you may come across a large stone cross on the ground.

It’s in honor of the dead soldiers who died at the camp all those years ago. If you see it, please pay your respects. You never know; a ghost in blue may be watching you.

Check out more haunted locations, watch a ghost tour from home, or book a ghost tour of Richmond in person at rvaghosts.com.