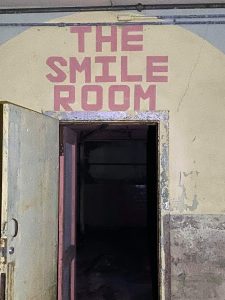 Take a short drive down I-95 and you’ll find yourself in Petersburg, a town that has had its share of ups, downs, and fascinating history. Not only was there a major Civil War siege in the city, but the first hospital for African-Americans was built here. Central State Hospital was originally known as the Central Lunatic Asylum when it was opened in 1870. While the hospital is a shadow of its former presence, it still offers forensic psychiatry (aka housing the criminally insane) to the greater Richmond area.

Our story starts after the Civil War, at the Howard’s Grove Freeman Hospital, created out of a former Confederate hospital in 1868. In the present day, this would be in the Fairmount Historic District on Fairmount Avenue. Originally, this hospital was going to treat a wide array of illnesses as a general practice. However, in 1870 the commonwealth of Virginia bought the property and began making it a place for “colored persons with unsound minds.” They took in patients from the Eastern Lunatic Asylum in Williamsburg and picked up African-Americans who had been jailed for lunacy across the state.

In 1882, a 300-acre farm called the Mayfield Farm in Dinwiddie County was purchased and upgraded to open as the new Central Lunatic Asylum. Over 400 patients were transferred from Howard’s Grove to the new asylum, with over 100 other people on a waitlist for space. The asylum was the only one to cater exclusively to African-Americans in the entire state.

An 1894 legislation was created to change the image of these hospitals, so the Central Lunatic Asylum became Central State Hospital (or just Central State). Politicians hoped the name change would evoke positive feelings towards both the patients and the medical staff at these facilities.

During the early part of the 1900s, women were accepted, which prompted the creation of a new building for them. After the Civil Rights Movement in 1967 did it start to accept all races and nationalities.

By the time of the 1950s, the hospital had reached its maximum capacity, with over 4,800 patients. There were over 80 buildings on the campus and another 200 acres had been bought, so Central State Hospital was essentially a small city at this point. Places included a chapel, training buildings, dorms for staff, a carpenter’s workshop, a pipe shop, an amphitheater with projection booths, a kitchen, and laundry facilities.

A huge scandal was revealed in 1980. Over 1,700 patients were forcefully sterilized, and it was revealed that altogether 7,205 people in the course of the hospital’s history had been sterilized from 1924-1973. Four people managed to bring a lawsuit against the State of Virginia with the help of the American Civil Liberties Union. They won, which meant that the state had to both notify people of their sterilizations and foot the tab for reversible operations.

Nowadays, the place is barely a shadow of its former glory. All the buildings are outdated and crumbling. There’s barely any staff because no one wants to work at a subpar, dangerous facility (it houses the criminals with a history of psychosis in a maximum-security wing). New patients are out in about 30 days.

A new Central State Hospital is going to be built over the course of the next five years. Nobody knows what’s going to happen to the structures currently standing. They may be sold, demolished, or simply abandoned. While the buildings may be forgotten, there is work being done to make sure the history of the patients is not forgotten.

The Legacy of Central State Hospital

King Davis found himself with a life-changing opportunity in 2009. As a former behavioral health commissioner in Virginia, he was made aware that Central State was about to destroy over a century’s worth of patient records to save space. Using his power as the current director of the Institute for Urban Policy Research & Analysis at the University of Texas, he made a plan to save the records for digitization.

These records were a goldmine of information. Every black person with a mental illness from 1885-1970 has gone to Central State. They showed the everyday workings of the hospital, treatments, everything. It’s a daunting collection, however, as there are over 800,000 documents, thousands of pictures, and a million index cards with patient information. It’s a ton, literally, of information to scan and document.

The program has currently hit a snag, as funding for the project has fallen through. Davis is still continuing to do everything he can to save these priceless records from being lost forever.

Insane in the Membrane

So, what could make you be considered a “lunatic” in late 1800s-early 1900s Virginia? Here are some of the reasons people were admitted to Central State:

Back in 1848, slaves could be placed in lunatic asylums with a medical ailment called “drapetomania.” This illness was peddled by a Samual A. Cartwright, explaining that slaves who ran away were mentally ill and the problem could be prevented by treating them like children, with physical beatings if necessary. If a Master tried too hard to treat slaves like people, they were going against the natural order of things and the slaves would retaliate by running away.

While the practice was mocked up North, it did have some hold South of the Mason-Dixon line. This would go far in explaining why there seemed to be an explosion of serious mental illness diagnoses in the African-American communities. Illnesses like schizophrenia, bipolar, mania, were more so attributed to former slaves and freedmen. Over 70% of Virginia’s asylum population had these severe illnesses…supposedly.

See, the myths of how blacks dealt with mental illness shifted depending on what was needed from them. When they were slaves, there was the idea that black people did not have any mental health issues. They were naturally immune, as long as they were needed as slaves, so they didn’t need care.

But then, once the slaves were freed after the Emancipation Proclamation, suddenly they were getting diagnosed with all these severe disorders that would land them in these new state hospitals. Hospitals run by former Confederate white slave owners, who believed hard work would cure their patients (along with physical restraint and assault). These former slaves were technically free but now found themselves working on the farmland that provided the food for the hospital, or in housekeeping. The difference was bread and water for those who didn’t work, and meat and potatoes for those who did. In fact, someone today would not be able to tell who the staff was and who were the patients.

Spooky, abandoned asylums are always haunted, right? Well, it seems like Central State is no different. While there are not any named ghosts, there are plenty of stories from patients and staff about objects moving, flickering lights, shadow people running around campus. There are even stories from police officers who have seen and heard things. Moans, wails, screams, and cries are said to echo around the crumbling buildings in the dead of night. Plants like ivy and trees grow up and through the abandoned buildings. It’s a creepy sight to behold. There’s a cemetery on the campus filled with nameless graves.

It certainly seems to have the hallmarks of a haunting. However, there may be some ghosts of the metaphorical type clinging to these decaying buildings as well. The history of institutionalized racism and assault should not be forgotten. This history, uncomfortable it may be, needs to be acknowledged; only then will ALL the ghosts find their final resting place.